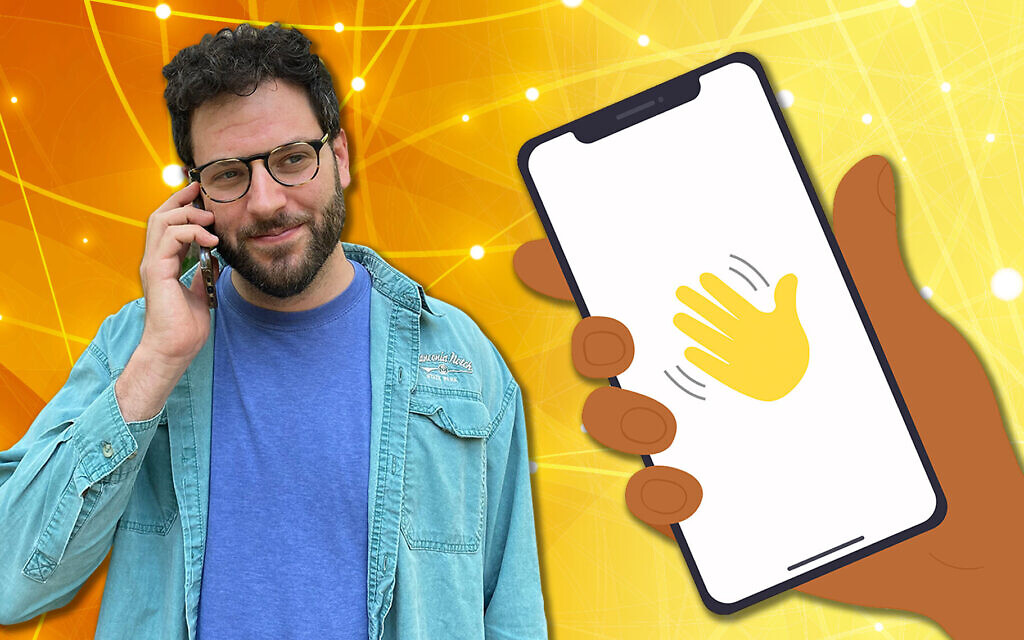 After meeting at the clubhouse, a Jew from New York works to help an Afghan from Kabul

JTA – The social networking app Clubhouse touts “unlikely human clashes” – but Nat Rosenzweig, a 34-year-old American Jewish musician, little expected it to set him up with two Afghans hiding from the Taliban .

Yet that’s exactly what happened after Rosenzweig signed up for the audio chat room app in early 2021. Launched a year earlier, Clubhouse has been a popular tool for people to safely socialize during the pandemic. Raised in a pluralistic Jewish community in Atlanta, Rosenzweig was drawn to spaces where the Israeli-Palestinian conflict was discussed, where he was exposed to different perspectives than in his progressive Jewish community. He made new friends there and continued the conversations well into the summer.

Then one day in late August, a newcomer walked into a chat room where Rosenzweig was chatting with some of his new friends. He said he was calling from Kabul and the room went silent.

“Suddenly we’re all asking him questions, asking if he’s okay,” Rosenzweig recalled to the Jewish Telegraphic Agency. Newcomer Safi was in his apartment next to his roommate Sayed.

The concern was justified. It was August 30, 2021, the day the last American troops left Afghanistan. Images of Afghans hanging from a US military plane as it takes off from Kabul Airport had just gone viral.

Sayed and Safi, who are in their 20s and had worked for the Afghan government before it fell to the Taliban, went into hiding. (Both asked for pseudonyms to protect their safety and that of their families.) A friend recommended Clubhouse so they had something to do. This chat room they accidentally joined was the first one they tried.

Brooklyn musician and paralegal Nat Rosenzweig is working to help an Afghan man he met through the Clubhouse app relocate to the United States. (Collage by Mollie Suss/ JTA)

Sayed and Safi were working in the Afghan Ministry of Finance when they heard about the Taliban’s impending takeover.

“Our director told me that you all need to go home because the situation is getting critical and it’s not safe to stay in the office, so we left,” Sayed told JTA via WhatsApp. “Then the Taliban came and took over everything. And then everything was different. The next day we couldn’t even go outside.”

Sayed had to stay away from Taliban radar. He had worked in the US military, and before this August he had heard that the Taliban were abducting, killing or extorting the families of people with American connections outside of Kabul. Sayed had also publicly campaigned for issues such as democracy and women’s rights. Days before Kabul fell, he was protesting against the Taliban in the streets.

When Rosenzweig heard her story, he had the impulse to help.

Illustrative: Afghans sit on a U.S. military plane to leave Afghanistan at Kabul military airport on August 19, 2021, following the military takeover of Afghanistan by the Taliban. (Shakib RAHMANI / AFP)

“Normally I would have thought, what can I do?” said Rosenzweig. “I’m just a random musician slash lawyer in New York.”

But he had just heard a story from a friend who, through a series of bizarre coincidences, had helped three Afghans leave the country. Rosenzweig’s friend had worked at Seeds of Peace, a social change and leadership organization that began as a summer camp where Israelis and Palestinians could meet but has expanded its reach to connect a variety of communities in conflict. Through the organization, she knew an Afghan woman whose life was in danger in Kabul. The Seeds of Peace community had found a flight for this woman, her mother and child, but the family was stuck in the crowd at Kabul Airport and could not get through.

Rosenzweig’s friend mentioned the situation over the phone to another friend who happened to be traveling in Bosnia with her family friend and happened to know a soldier who worked at Kabul Airport. The soldier was eventually able to escort the family through the crowd onto the evacuating plane, and the family got to safety.

The unheard-of strokes of luck in history fell to Rosenzweig.

“I’m just thinking of all the things people need to do to circumvent the restrictions imposed by governments that are unwilling to help on a larger scale,” he said.

Additionally, Rosenzweig had grown up hearing stories about his own grandparents’ survival in the Holocaust.

“I am deeply aware of how much grace, luck and the kindness of strangers went into rescuing Jews who would otherwise have been killed – including my ancestors.”

He told Sayed and Safi that he wanted to help.

“How will he help us?” Said wondering. “But he was kind of sincere and loyal. And he really wanted it.”

The three put their heads together. Rosenzweig got them American sponsors and a lawyer, and they worked on their humanitarian parole applications. Sayed and Safi rarely left the house and depended on friends to bring them groceries. When their money ran out in November, they apologetically asked if Rosenzweig could help with basic living expenses. Rosenzweig raised around $5,000 on GoFundMe and sent the money to Afghanistan through Western Union. But getting to the local bank in Kabul was complicated.

“It was risky for us to withdraw money on our behalf because the banks reported to the Taliban on a daily basis,” Sayed said.

So Sayed disguised himself and traveled to Pakistan where he collected the money.

“Humanitarian parole was never intended on this scale,” said Jeff Phaneuf, the director of advocacy at No One Left Behind, a nonprofit dedicated to helping Afghans and Iraqis who have worked with the US government obtain immigrant visas. “It wasn’t equipped to handle the influx of probably over 100,000 applications.”

Demonstrators, including former British Army interpreters in Afghanistan, hold placards as they protest opposite the Houses of Parliament in London August 18, 2021 following the withdrawal of troops and the Taliban’s regained power in Kabul. (Glyn Kirk / AFP)

Luckily for Sayed, a student visa was another option: He had a BS in economics and a GPA of 3.8, and he had applied for a scholarship to graduate school in the United States, where he hoped to study before returning to Afghanistan to pursue a career in public service. But the scholarship fell through after the Taliban took over.

Sayed found a YouTube video about economics by a professor at the New School in New York City and applied to their master’s program in global political economy. He was accepted – but her scholarship only covered 55 percent of his tuition and fees. Still, it was promising. If Sayed could raise the funds, a student visa was all but guaranteed.

Sayed broke the news to Rosenzweig. “He was happier than me,” Sayed said. “Like, ‘You did it all by yourself and that’s a really great idea and I promise I’ll make it happen.’ Then I also became more motivated.”

The two started a GoFundMe campaign to raise funds for Sayed’s visit to the New School this fall, which Rosenzweig distributed to friends and his Jewish community (they raised about a quarter of their goal). Safi, whose English is not so good, is still hoping for parole on humanitarian grounds.

The story is an example of how American private individuals have worked to help Afghans, said Phaneuf, a former Marine Corps veteran who had local friends at Kabul Airport last summer.

“That was the silver lining of utter chaos and horror that began last August, how many Americans were willing to drop everything and go to incredible lengths to help these people with things like visas or requests for humanitarian parole.” said Phaneuf.

A spokesperson for Clubhouse said of the story, “Stories like Nat and Sayed’s remind us how a simple conversation can be the start of something powerful and even life-changing.”

Almost a year has passed since they met in the chat room. Sayed and Safi are still hiding out, doing their best to occupy themselves with reading and historical films.

Sayed recently watched Steven Spielberg’s Holocaust classic, Schindler’s List. The film, he said, “shows how miserable our lives can get even when it’s not our fault. … The Taliban are in no way different from Hitler in their mentality, their ego and their hatred of the human species.”

Rosenzweig, who has sometimes felt overwhelmed, is committed to Sayed and Safi.

“It’s clear that in order for someone to get out of there and get safely to a place like the US, they either have to have a lot of money or power – or they need someone to help them,” he said.

This is true of Rosenzweig’s grandmother, who was a teenager at boarding school when the Nazis invaded. Her parents sent her a telegram to return to their Lithuanian village, but instead she boarded a train to Russia with her sister. It saved her life – everyone in her parents’ village who didn’t flee was lined up and killed. Rosenzweig’s grandmother and the other Jews in her train made their way to Uzbekistan.

“In Uzbekistan there was a random woman who hosted her in her house for a while. That’s such a big deed for a stranger. I wouldn’t have ended up here if it wasn’t for people doing stuff like this,” Rosenzweig said.

Rosenzweig’s upbringing made him particularly sensitive to the fragility of Sayed and Safi’s situation.

“I think Jewish values ​​are passed on, not just through texts and synagogues, but through the whole community that educates us and what they think is important,” he said. “I think my community has a real sensitivity to the fact that people’s lives hang by a thread, and therefore to the fact that a really small act can potentially change someone’s life completely – and such an act is often necessary.” to completely transform someone’s life.”

With any luck, Sayed and Rosenzweig will soon meet in person in New York. Sayed said of their chance online meeting, “I don’t know whether to call it coincidence or fate.”

Too much partisanship from Fischer in Ky Supreme Court race