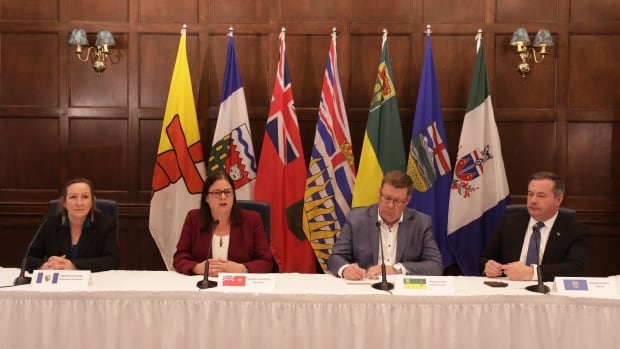 At a meeting in Regina, western prime ministers call for “sustainable” financing of the health system from the federal government

Canada’s western prime ministers are meeting in Regina on Friday and are calling on the federal government to provide “sustainable” healthcare funding.

The annual meeting of provincial and territorial leaders from British Columbia, Alberta, Saskatchewan, Manitoba, the Northwest Territories, Yukon and 2021 was held virtually.

Premiers from across Canada have lobbied the federal government to increase its share of health care transfers from 22 percent to 35 percent, or $28 billion a year.

Horgan said providing the health care was “urgent and urgent”.

“We’ve never been at such a critical juncture,” said Horgan.

Moe and Horgan said the pressures of the pandemic and the resulting increase in wait times for surgeries and diagnoses have increased the urgency for Ottawa to pay a higher share of healthcare costs.

“This is not your regularly scheduled program. This has been built over decades,” Horgan said.

After the prime ministers’ meeting in 2021 said Trudeau“we will be there to increase those transfers. But that conversation needs to happen once we get through this pandemic.”

Horgan said that while the pandemic is ongoing, “now is the time to have that conversation.”

He said federal ministers had discussed the issue with prime ministers, noting that provincial and territorial leaders “have tried to engage in shuttle diplomacy.”

“Is it just about the money? Yes, because it’s a human service,” Horgan said.

“We need to tackle this as soon as possible.”

Moe said the provinces are working to make the federal government “a fair and full funding partner for health care services across the country.”

Horgan said he “tested” the healthcare system due to his own cancer diagnosis and treatment over the past year.

Moe and Horgan said health transfers might sound like “bookkeeping practices” but are vital to health care delivery in the country.

“To be at the birthplace of Medicare and to talk about the future is totally appropriate. There is nothing more Canadian than public health care.” Said Horgan.

Horgan and Moe are the longest-serving prime ministers in Canada.

Horgan said he had been at the First Minister’s table for five years and “the most important issue was healthcare and service delivery”.

Moe said recent federal government announcements, such as about $2 billion for surgical wait times, are welcome and three- to five-year funding arrangements are “appreciated” but would fall short of premier calls.

Moe said he was “confident” the federal government would move this discussion forward, but added he was frustrated and upset by the delay and lack of commitment.

Horgan said a good time for Trudeau and the federal government to come to the table is the July 10-12 meeting of the Union Council of Canadian Prime Ministers in Victoria.

Closing the conference, Moe and the Premiers of Alberta, Manitoba, Yukon and the Northwest Territories held a media presence.

Other topics discussed at Friday’s meeting included the economy, energy security, the war in Ukraine and Arctic sovereignty.

While Ottawa ministers are calling for more funding for health care, they said they don’t want the federal government to “violate” areas of provincial and territorial jurisdiction.

“They share concerns about the federal government’s lack of consultation with provinces and territories during the development of its 2030 emissions reduction plan,” the ministers said in a joint press release.

Alberta Premier Jason Kenney said the “top concern” for western Canadians is the cost of living in the face of inflation.

“This is a crisis caused by two things. A lack of investment in oil and gas exploration development, part of which is being fueled by anti-energy policies by Ottawa and other governments,” Kenney said.

“Second, it comes from Putin’s egregious invasion of Ukraine, which has rightly led to an embargo on Russian oil exports.”

Kenney said Western Canada could be a “solution to the global challenge of energy poverty.”

The joint press release by the prime ministers began with a request for “timely exchange of information” on assistance in settling Ukrainian refugees.

“Western Premiers would also welcome an ongoing discussion on federal funding to ensure Ukrainians have access to the services they need to transition to life in Canada,” the release said.

“What is happening at home to her relatives is absolutely appalling. This in an unnecessary war forced upon the Ukrainians,” said Stefanson.

“We will ensure that those individuals who come here to find safe haven are given the support they need while they are in our country and province.”

The prime ministers said they discussed the Russian invasion of Ukraine and “other foreign activities in the Arctic and the impact these are having on Arctic security.”

“The Western Premiers agreed that the Arctic is essential to Canada’s security, sovereignty and economic prosperity and that significant federal investment is required through increased development and presence in the Northern and Arctic regions to support thriving communities,” according to the joint press release.