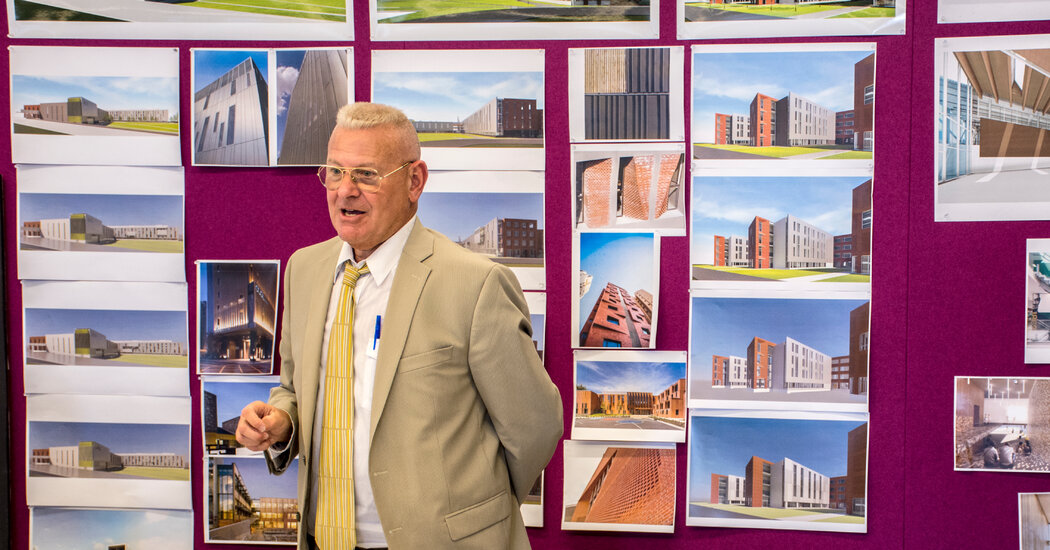 Edward A. Feiner, who as the chief architect of the US government revolutionized the public image of countless federal agencies by hiring renowned architects to design hundreds of courthouses, government laboratories, border stations and office buildings, died July 1 at a nursing home in Falls Church, Virginia. He was 75 years old.

His wife, Frances Feiner, said the cause was a brain tumor.

Although trained as an architect, Mr. Feiner did not do much actual design work during his nearly 35-year public career. He spent most of his time with the General Services Administration, essentially the federal government‘s landlord.

Mr. Feiner’s task was to oversee the construction of new buildings and the renovation of old buildings, starting with the search for an architect’s office. He organized outside panels to sort through proposals to create a shortlist, then personally selected the winners.

It may not sound glamorous, but with a portfolio of some 8,700 buildings and building dozens more every year, the task gave him immense impact on the country’s civic image. In 2003, Esquire magazine named him “the most powerful architect in America today.”

Historically, the process of selecting architects has been as bureaucratic as one might expect, and just as likely to result in insipid mediocrity. The winners were almost always large corporations, many of which had teams specializing in managing government documents.

That changed under Mr. Feiner. Beginning in the early 1990s, he brought great design to projects that were both high-profile and obscure: for example, he commissioned Thom Mayne and his company Morphosis to design a high-rise office building in downtown San Francisco and a satellite operations facility for the National Oceanic and Atmospheric Administration in Suitland, Md.

His list of collaborators filled the who’s who of modern American architecture. Richard Meier, known for the Getty Center in Los Angeles, and Arquitectonica, a Miami company known for its swanky hotels, both designed the courthouses (Mr. Meier’s is the Alfonse M. D’Amato United States Courthouse in Central Islip, NY, on Long Island). Also IM Pei, Robert AM Stern and Kohn Pedersen Fox.

Mr. Feiner was not the first to insist that good design is in the interests of government. Among the guidelines he sent to interested firms were lengthy quotations from the Guiding Principles for Federal Architecture, written by Daniel Patrick Moynihan in 1962 when he was a junior staffer in the Kennedy administration.

But those policies were ambitious, and decades later the government continued to produce drab monoliths. It took someone with Mr. Feiner’s contagious enthusiasm to make it happen.

He balanced determination and charisma with disarming eccentricities: he liked snakeskin cowboy boots and snap-button shirts, and wore a cropped silhouette to put a sergeant in the shade.

He took bad bourgeois design as an almost personal affront. He kept photos of what he considered architectural “horrors” pinned to his office wall. One day in 1998, while standing across from the chunky Jacob Javits Federal Building in Lower Manhattan, he asked a Washington Post reporter, “You look at this building and you say why? Why would you build a piece of Schlock in the midst of landmarks?”

Mr. Feiner was frustrated by the lack of new projects during the Reagan-era cost-cutting frenzy. But the opportunity finally presented itself in the early 1990s, when the government launched a 13-year, $10 billion campaign to build or renovate hundreds of federal courthouses.

The three men formed a five-person panel to select the architect for a new Boston courthouse, and enlisted architects and academics from the private sector as consultants. They finally settled on Henry Cobb of Pei Cobb Freed & Partners, who had previously designed the nearby John Hancock Tower.

The process became the model for Mr. Feiner’s signature achievement: a system he called Design Excellence. Rather than asking companies for mountains of paperwork, often unrelated to their design ideas, he had them submit a portfolio detailing the type of work they had done in the past and the type of ideas they brought to the present one project could contribute .

He mandated private sector architects to sit on selection panels and set up specialized programs to develop standards for design issues such as accessibility, sustainability and safety.

Design excellence opened the door not only for established architects like Mr. Cobb, but also for up-and-coming ones.

For the Oklahoma City Federal Building, replacing the building destroyed by terrorists in 1994, Mr. Feiner chose Carol Ross Barney, whose designs for Chicago public schools impressed him with their balance of safety, accessibility and openness.

“He wasn’t looking at how many big office buildings we were building, he was looking at the quality of our work,” Ms Barney said in a telephone interview.

Mr. Feiner’s emphasis on design-consciousness over budget-consciousness often got him at odds with Congress, particularly with financial hawks like Senator John McCain, the Arizona Republican who mocked Mr. Cobb’s courthouse as the “Taj Mahal.”

Mr. Feiner had a different opinion. Bad design, he repeatedly said, can only diminish the public’s respect for government and what it can achieve; Good design, on the other hand, was crucial to creating a vibrant civic culture.

“If we are not willing to present our governmental institutions as dignified and stable,” he told the Washington Post, “then what kind of services can we expect from them?”

Like Mr. Moynihan in his “Guiding Principles,” Mr. Feiner insisted that there should be no official Federal style, and his commissions ranged from Mr. Mayne’s bold metallic forms to Mr. Stern’s austere classicism.

Edward Alan Feiner was born in Manhattan on October 16, 1946 and grew up in the Bronx. His father Solomon owned a company that made metal garbage cans. His mother, Martha (Lipsky) Feiner, was a housewife.

Mr. Feiner then went to the Navy, where he could immediately take charge of major projects such as hospitals, shipyards and submarine bases. Aside from a brief stint for Victor Gruen, a mall pioneer, he remained in the Navy until 1981 when he joined the Government Services Administration.

After retiring as chief architect in 2005, he worked as an executive at architectural firms Skidmore, Owings & Merrill, and Perkins & Will, and at Las Vegas Sands, the casino and resort company.

Along with his wife, he is survived by his son Lance; his daughter Melissa Feiner Rockholt; and three grandchildren.