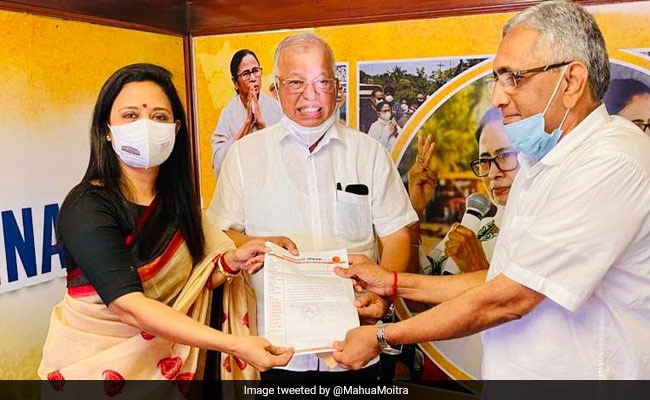 MGP said it would make a decision based on the final figures after consulting with the Trinamool.

A day after exit polls pointed to a hung assembly in the coastal state of Goa, sources say the BJP and Trinamool-ally Maharashtrawadi Gomantak Party (MGP) are warming up to each other. Just two days before the votes were counted, Prime Minister Pramod Sawant said the central BJP leadership was already in talks with the MGP to seek its support if his party lacked some government-forming figures, PTI news agency reported. However, the MGP had previously indicated it would not support Mr Sawant as prime minister.

The MGP has also not ruled out an alliance with the BJP, claiming that both Congress and the ruling BJP have contacted the regional party, sources said.

Meanwhile, sources also said an MGP-Trinamool meeting is scheduled tomorrow to decide on a post-election alliance. The regional party has said it will make a decision based on the final figures after consulting the Trinamool Congress.

Pramod Sawant is in Delhi to meet Prime Minister Narendra Modi and brief him on the party’s prospects of retaining power in Goa. Mr. Sawant will later fly to Mumbai for a meeting with Devendra Fadnavis, the BJP’s Goa officer.

MGP MP Sudin Dhavalikar had said on Saturday his party would determine its position after the results of the Goa election by taking the TMC in confidence, but “never support Pramod Sawant as prime minister” because two MGP ministers were removed from the state cabinet were after he became the Chief Minister after Manohar Parrikar’s death. However, Mr Dhavalikar did not categorically rule out backing the BJP again.

With exit polls predicting that no party can reach the majority mark alone, smaller players will use their power as kingmakers. Sources say the MGP and other parties have hinted their support will come at a price – the post of chief minister. The BJP may consider sacrificing Mr Sawant for the sake of numbers.

Responding to Sudin Dhavalikar’s testimony, Mr Sawant said, “Even if any party supports us, they cannot make a decision about our leadership.” kept elections away from the BJP this year.

“The MGP was removed from government for running against our official candidate in a 2019 by-election,” he said.

Mr Sawant also said he had no personal differences with the Dhavalikar brothers. “The differences were of a political nature,” he added.

Congress has signaled a massive shift by saying it is open to an alliance with Arvind Kejriwals (AAP) and the Trinamool – both bitter rivals in states like Delhi and Bengal.

The exit polls after yesterday’s voting close showed a head-to-head battle in Goa. Both the BJP and Congress are likely to capture 16 of the state’s 40 seats, falling short of the majority mark of 21, according to NDTV’s exit polls.

Elections to the 40-member Goa Assembly were held on February 14th and the results will be announced on March 10th.

In the 2017 Goa Assembly elections, the Congress emerged as the largest single party with 17 seats.

But the BJP, which had sacked 13 seats, quickly allied with the Deepak Dhavalikar-led MGP (Goa’s oldest regional organization), the Goa Forward Party and independents to form a government led by Manohar Parrikar.

This time, the MGP ran alongside the Mamata Banerjee-led Trinamool Congress (TMC) in the state assembly elections.

This time Congress took no chances and dispatched Fr. Chidambaram and his fireman from Karnataka, DK Shivakumar, to Goa to negotiate with potential ‘kingmakers’. Congressional leaders were also dispatched to other states, expecting a close verdict.

Asked if he would be the next CM if the BJP remains in power in the coastal state, Mr Sawant said: “The election was held under my leadership. From our (BJPs) national president to the state president, everyone has said and it has been repeated so many times that we will form the government under my leadership.” to lead the next government,” he said.