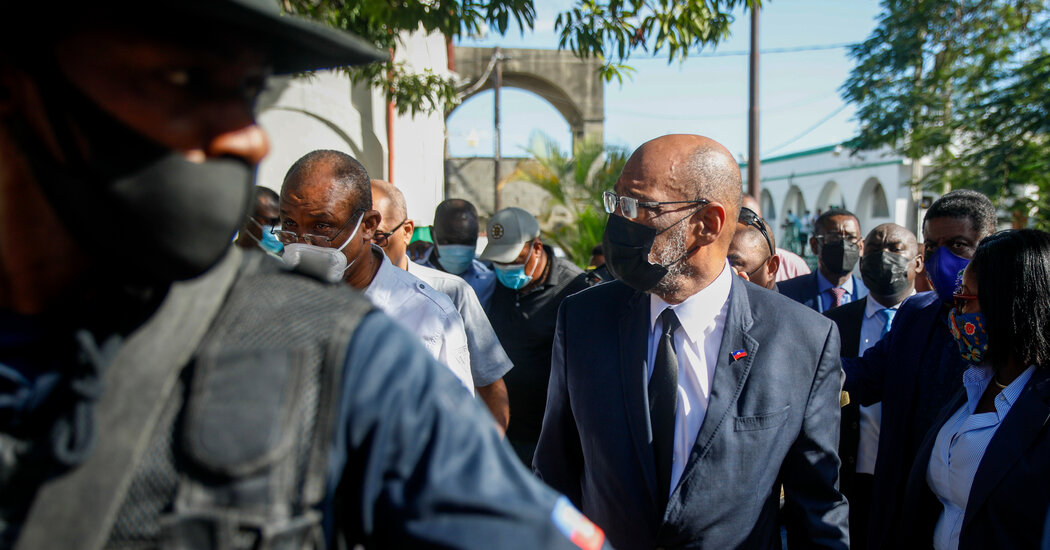 A powerful Haitian opposition group is calling on the United States to withdraw its support for Prime Minister Ariel Henry’s government in Haiti, saying the government’s legitimacy is being tarnished by delayed elections and Henry’s potential connection to the country’s presidential assassination.

The opposition group known as the Montana Accord has urged the United States to act by Monday – the date President Jovenel Moïse vowed to step down before being gunned down in his home last year. The government will be declared unconstitutional by Monday, according to the Montana Accord and independent experts.

The showdown has put the Biden administration in an increasingly awkward position. Fearing that Haiti could slide further into chaos, the United States is supporting the status quo for now: a ruling party that has ruled for about a decade and has seen gang power explode across the country and corruption run rampant.

“If we look at the history of Haiti, it’s full of the international community intervening in Haitian politics and picking winners and losers,” Brian Nichols, deputy secretary of state for western hemisphere affairs, said in January. “Our goal with the US government is to avoid that.”

Amid doubts that the Henry government will be able to hold elections this year, anti-government demonstrations have erupted across Port-au-Prince, the capital, and local gangs have used the moment of rising insecurity to expand their territory.

Adding to the instability, gangs stormed the airport road on Friday, closing businesses and putting Haitian police on high alert in anticipation of further violence on Monday.

The Montana Accords called for the formation of an interim government, headed by Fritz Alphonse Jean, to restore security before elections are finally held. By continuing to support the current administration, the group says the United States is essentially choosing a side.

“Insecurity is widespread, fears of kidnapping and rape are the everyday situation of the average Haitian,” Mr Jean said in an interview on Friday. “This is a state of disarray and the Henry administration just sits there, unable to address these challenges.”

Analysts recognize that an interim government led by the Montana Accord would also be unconstitutional. But they say it has more legitimacy than the Henry government because the group — made up of civil society organizations and powerful political figures — represents a broader stratum of the population than the current government, which was elected with a shockingly low turnout.

“What is the most constitutional government you can have right now? The short answer is zero,” said Alexandra Filippova, senior attorney at the Institute for Justice & Democracy in Haiti, a think tank focused on improving the justice system.

“So the next best question is: what brings you closer to legitimate constitutional government? We see the Montana Group is a flawed process but the best way to pave the way for legitimate government.”

Senior American officials have called on the Montana Accords to work with Mr Henry’s administration to find a way forward, recognizing that the group is an important partner in achieving a broadly representative political system to transform the country to conduct elections.

Mr Henry said the next government must be formed through elections, not a caretaker government.

The Montana Accord, however, claims that Mr. Henry failed to create a workable blueprint for improving security and safely holding free and fair elections amid widespread gang violence, rising corruption and a disaffected Haitian population.

Adding to the suspicion is that Mr Henry may also be involved in the killing of Mr Moïse, opposition members say.

In September, Haiti’s chief prosecutor claimed that the prime minister had been in contact with the prime suspect in Mr Moïse’s case in the days leading up to and hours after the assassination. The prosecutor asked the Attorney General to formally charge Mr Henry with murder. Mr. Henry quickly dismissed both officers.

Telephone transcripts obtained by the New York Times and an exclusive interview with another assassination suspect also support these allegations. Mr Henry has denied the allegations.

“The whole system is untrustworthy,” said Monique Clesca, a member of the Montana Accord. “There’s no way you can go to the polls with Ariel Henry; nobody trusts him after this assassination.”

So far, American officials have denied the allegations against the prime minister while urging the government and the Montana Accords to reach a consensus. Mr. Henry, a senior US official, said in an interview this month that he is considered a janitor and does not have the unconditional support of the United States.

Average Haitians are skeptical that government or opposition can improve their lives.

“You can’t expect anything from the decision-makers, they always take care of themselves,” said Vanessa Jacques, 29, an unemployed mother.

Ms. Jacques described a feeling of insecurity so deep that it paralyzed her life and prevented her from attending university or running errands.

“If you live in Haiti, you have to take care of yourself, otherwise no one will,” she said.

Haiti’s recent presidential election was riddled with problems and unrepresentative of the people. Mr Moïse was elected in 2016 with just 600,000 votes from a population of almost six million eligible voters. His predecessor, Michel Martelly, was elected in a contentious election that has accused the United States of intervening on his behalf.

Still, many Haitian leaders see elections as the only way forward.

“Elections are a must,” said Edmond Bocchit, Haiti’s ambassador to the United States. “Now it’s about when and how we come together to make it happen.”

While some business leaders in Haiti say Mr Henry has questions to answer regarding Mr Moïse’s assassination, they add that he was able to prevent the situation and also achieved an important goal: raising fuel prices. Fuel subsidies nearly bankrupted the state, and the previous government was unable to remove them without sparking riots.

“The country needs to keep moving,” said Wilhelm Lemke, President of the Haitian Manufacturers Association. “And they prevented it from unraveling,” he said, but Mr Henry must turn to the opposition to form a more representative government. He stressed that Mr Henry needed to sit down with the opposition to reach a broader political agreement.

But “the Prime Minister should address the conclusions that he could be part of the assassination and all that. By not addressing it, you bring water to your critics,” he said. “And you’re diluting your moral authority.”