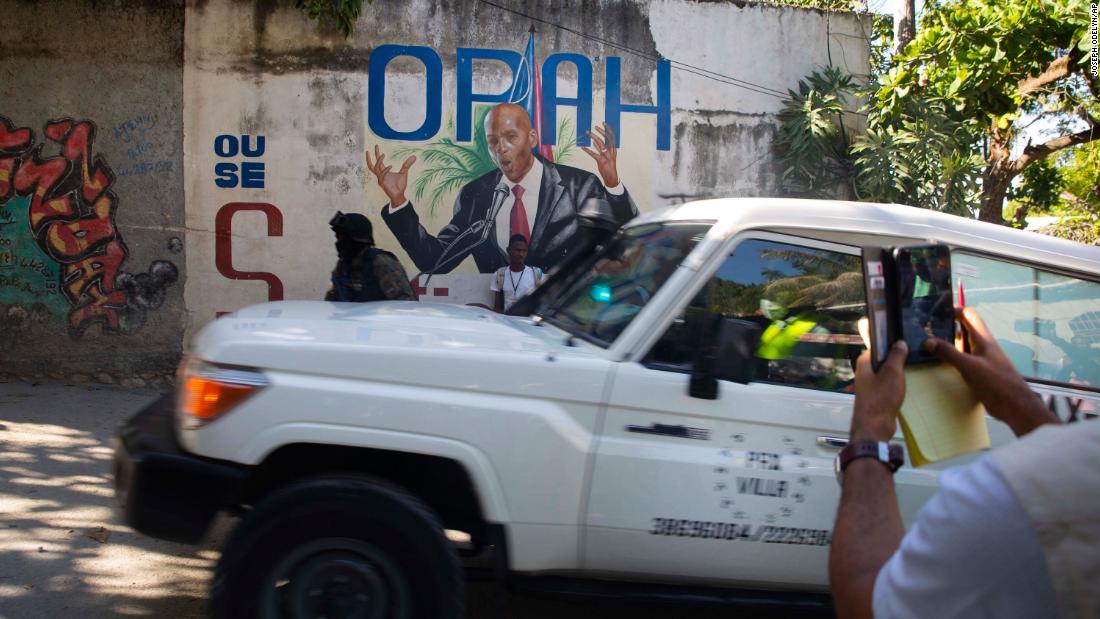 Speaking to CNN en Español, Ambassador Bocchit Edmond said on Wednesday evening that the suspects are foreigners and that the Haitian National Police are in the process of determining their nationality.

“We’re trying to move forward and see how we can identify more of those who were involved in this horrific act,” he said.

It comes after President Moise was killed in an attack on his private home early Wednesday. The attackers stormed Moise’s house around 1 a.m. and mortally wounded the head of state.

Haiti’s first lady, Martine Moise, was shot in the attack and evacuated to a Miami hospital for treatment, according to Edmond, who said her condition was stable but critical. Pictures showed the first lady on a stretcher that arrived at Jackson Health System’s Ryder Trauma Center in Miami.

Moises death takes place against a. instead of Extreme violence background in the Haitian capital Port-au-Prince, which claimed the lives of many citizens and escalated, especially in June. Acting Prime Minister Claude Joseph, who had declared the country under siege, described the attack as a “heinous, inhuman and barbaric act” and asked the citizens to remain calm.

The police have not publicly identified the suspected attackers and little is known about who committed the attack.

Ambassador Edmond said he believed the suspects received help from Haitian nationals in driving vehicles to the president’s residence where the president was killed. He had previously referred to them as “mercenaries” and “well-trained killers”.

Videos of the scene showed they spoke Spanish and presented themselves as agents of the Drug and Enforcement Administration (DEA), he said.

“I think they are fake DEA agents,” he told reporters on Wednesday.

“We don’t know how they got in,” Edmond said, adding that they didn’t know if the attackers were still in the country. He said if they left it would be across a land border with the Dominican Republic as Haiti had spotted a departing plane and the airport has been closed since the attack. He said the airport will reopen “as soon as we have this situation under control”.

The state of siege is the middle of three levels of emergency under Haitian law, in addition to the lower “state of emergency” and the highest level, which is referred to as the “state of war”.

Under the siege regime, national borders are closed and martial law is temporarily imposed, with Haiti’s military and national police empowered to enforce the law.

Moise, 53, was a former banana exporter and a divisive figure in Haitian politics. He spent most of the past year waging a political war with the opposition over the term of his presidency.

It is not currently clear who will replace him. Judge Jean Wilner Morin, president of the National Association of Haitian Judges, told CNN that the president’s succession in the country is now unclear.

Haiti’s Supreme Court President would normally be next in line, but he recently died of Covid-19. In order for incumbent Prime Minister Joseph to formally replace the president, he would have to be approved by the Haitian parliament, Morin said. But without the recent elections, parliament was practically dead.

During his presidency, Moise had repeatedly failed to hold local and national elections, leaving much of the country’s government infrastructure empty. In addition to the presidential and parliamentary elections, a constitutional referendum is to take place in September. Local and municipal elections are scheduled for January 16, 2022, as the official election calendar shows.

Many in the country had denied Moises’ right to continue serving as president this year.

Moise’s private residence is in Petion-Ville, in Haiti’s capital, Port-au-Prince.

While the U.S., the United Nations, and the Organization of American States backed his claim to a fifth year in office, critics say he should have resigned on Feb.7, citing a constitutional provision that starts the clock once a president is elected instead of when he takes over the office.

However, Moise claimed his five-year term should end in 2022 as he was not sworn in until February 2017. His inauguration was postponed on allegations of electoral fraud during the 2015 election, resulting in a presidential runoff that was postponed twice, which authorities termed threats and “security concerns”.

Worsening of the situation

Haiti’s capital has been suffering from violence for weeks, rival groups fighting each other or the police for control of the streets, displacing tens of thousands of people and worsening the country’s humanitarian crisis.

Ex-police officer Jimmy Cherizier swore in front of local media last week that he would carry out a “revolution” in the city.

In the meantime, the coronavirus pandemic in Haiti has worsened. The country is one of the few countries in the world that has not yet started vaccinating against the virus.

Last month, the Pan American Health Organization (PAHO) warned that the country’s response must be expanded dramatically to deal with escalating cases, hospital admissions and deaths. Haiti has reported more than 19,000 Covid-19 cases and 467 deaths, according to Johns Hopkins University.

At the same time, the impoverished Caribbean country is facing a grim economic situation. The economy had already shrunk before the pandemic, shrinking a further 3.8% in 2020, with around 60% of the population now living in poverty, according to the World Bank.

UNICEF, the United Nations Children’s Fund, said in May that severe acute malnutrition among children in Haiti is expected to more than double this year due to increased violence, Covid-19 and a lack of access to basic services.

Lawyer talks about the future of Augusta Commissioner Sias, who is facing federal charges