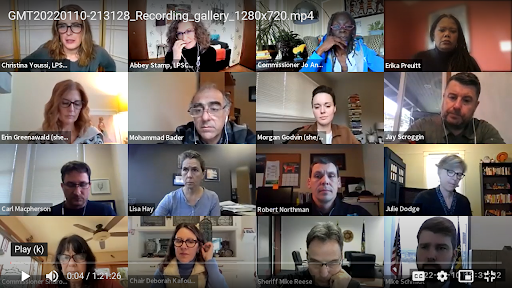 The 24-member executive committee — led by co-chairs of Multnomah County Chair Deborah Kafoury and Portland City Commissioner Jo Ann Hardesty – Includes representatives from healthcare, social services, law enforcement, members of the judiciary, defense attorneys, community providers, victims’ rights advocates and more. A critical component of the statutory body, however, is the inclusion of community representatives who can bring the voices of those often unheard at the criminal justice policy tables.

“Having a ‘citizen member’ of the LPSCC is required by law; that was the language written in the 1995 resolution that created LPSCCs statewide,” said Abbey Stamp, Executive Director of LPSCC. “When I came on board in 2013, we had had a community member representative for 20 years. I would like to thank Christina Youssi, the Chair’s office and the Office of Community Involvement for trying to find a better way to recruit people.

“I’m originally from Wisconsin and moved here to be a high school teacher Rosemary Anderson High School‘ said Drury, who was the first of the new members to introduce himself to the committee.

It was a very conscious decision, he shared. “It’s actually funny because a lot of my students would ask me later, ‘Did you know we’re the school with all the bad kids in it?’ And the answer was yes, but I don’t think they were/are bad kids.”

Raised in Madison, Drury struggled in school and struggled to fit in. He said he had only one black teacher from kindergarten through 12th grade.

“I didn’t see education as a space for me and I didn’t meet my father until I was 10 years old. When I came to Portland, I wanted to work in a school environment with students from similar backgrounds to me,” he said.

In exchange for teaching social studies to high school students, Drury said, “You gave me a perspective on Portland that has shaped my future work.”

“My view of Portland has been shaped by youth who have seen the least of the many resources that exist in the city. That is the lens of the work I bring to the LPSCC Committee.”

After three years at POIC + Rosemary Anderson High School, Drury began founding the company Word is bond, which was officially launched in the summer of 2017. The six-week paid summer internship program serves young black men ages 16 to 21 in the greater Portland area. Today, the program has expanded to include the development of young black men by helping them build connections with those who keep the community safe. Providing leadership, professional development, career exploration and public speaking opportunities; and education about black history and storytelling.

“I believe our country has failed to protect and support black people and give them the opportunity to thrive in this country. So I think there’s a lot we can do locally,” said Drury.

Community safety is reminiscent of a tight dynamic of law enforcement and crime, Drury said, “but it’s much bigger than that. It’s about education, housing and a lot of opportunities, and what I’m going to do is community safety out.” from a holistic point of view.”

“I recently graduated from Oregon Health and Sciences University-PSU School of Public Health. Public health is the lens through which I see the world. In particular, public safety is public health.”

A passionate advocate of harm reduction and overdose prevention strategies, Godvin serves on the Oregon Alcohol and Drug Policy Commission, as well as Measure 110 Supervisory Board and Accountability Board tasked with overseeing grant funding for dollars in addict recovery through the decriminalization of drug possession.

But that wasn’t always her story, she shared. “I was released from federal prison four years ago yesterday. but my story goes much deeper.

Godvin shared that she started using drugs and dropped out of high school. But because her mother was a “career military man,” she joined the US Air Force to escape. After receiving a medical discharge, she attempted to join the Washington County Sheriff’s Office.

When that didn’t work out, she turned to heroin, an addiction that lasted for many years.

She has been arrested multiple times for drug possession and has fled the Multnomah County Sanctions Treatment Opportunities Progress (STOP) Court. Eventually, she was sentenced to federal prison for supplying the drugs that led to her best friend’s death from an overdose.

“I saw a different side of law enforcement than what I learned as a military brat coming from a place with racial and class privileges,” she said.

“As soon as I got out, I started campaigning for justice…especially crime prevention rather than law enforcement. One of my biggest areas is overdose prevention. I work in harm reduction now.”

Godvin founded Beats Overdose Prevention, a unique harm reduction program that combines touring overdose prevention with hip-hop musicians such as Atmosphere and Cypress Hill. Her real job is as an editor for Archive of American Prison Newspapers, a newspaper collection by and for inmates.

“I want us to use resources to prevent damage before it happens, rather than waiting for damage to happen and then using that to punish another life,” she said.

Robert Northman, a senior at Portland State University with a major in social sciences and a minor in citizenship, shared some of his life experiences with members of the executive committee.

Born and raised in northeast Portland, Northman grew up in poverty. His parents struggled with addictions and he became involved in the justice system from an early age.

Today, his progress toward a college degree and his work in the community shine brightest in his life.

“I’ve worked and improved the living conditions of the homeless and worked with at-risk youth and advocated for access to higher education for prison inmates,” he said. “I have worked with formerly incarcerated individuals to support community re-entry and help identify needs and match them with resources.

“I am committed to working with this committee to find ways to address the many challenges we face together in a place we all call home.”

Thanking the new members, Commissioner Hardesty said: “I am grateful that you are willing to volunteer your time to help us continue this transformational process. I think we all understand that transformation is not an overnight process, but we need to be able to measure that we are moving in the right direction. So I look forward to working with each of you.”

“I’ve lived in Oregon for 42 years,” Judge Matarazzo said. My favorite thing on the bench was working as a judge for the DUII Intensive Supervision Program.

The DUII Intensive Supervision Program, or DISP, is a voluntary post-sentencing treatment court for repeat DUII offenders. The program takes a collaborative and holistic approach to solving problems that contribute to the emergence of the offender.

“I think that was one of the most meaningful aspects of my life because we actually had to communicate with people on a regular basis,” Matarazzo said.

“As opposed to the normal court process where you might see someone once or twice, I’ve spent a good four years with people and by the time they graduated we knew them, their families and their stories. It gave you a glimpse of what a treatment court can do to change people’s behavior and give meaning to life.”

She continued: “I look forward to hearing about what you all are doing and participating as well as I do