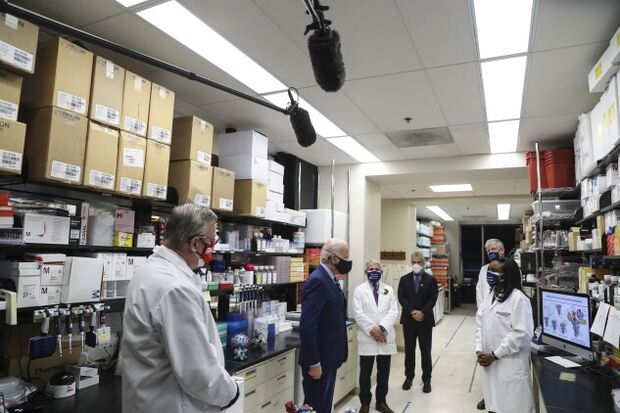 Lobbying reports show that the creation of a $1 billion federal health research agency has sparked a race between well-funded research organizations to bring the new facility to their state or region.

Biotechnology groups in Massachusetts, a North Carolina hospital network, research groups in Texas, the Cleveland Clinic and the Atlanta Chamber of Commerce were among those this year listing the prospective Advanced Research Projects Agency for Health on their lobbying disclosures. In the past nine months, lobbying for part of the new agency has exceeded $100,000, according to disclosures.

“The idea of ​​building something new is exciting, and we all want to be on the ground floor of it,” said James Hunter, vice president of government relations at RTI International, a nonprofit research organization that’s part of a group in North Carolina trying to do that Move ARPA-H headquarters to the state.

President Joe Biden has sold ARPA-H as a way for the government to fund high-risk, high-reward projects designed to accelerate advances in health technologies and biotechnology, channeling federal money to companies and researchers with promising, innovative ideas.

Legislators make their own pitches. Bipartisan delegations from Georgia, Illinois, Massachusetts, Missouri, North Carolina, Ohio and Texas have sent letters to Secretary of Health and Human Services Xavier Becerra asking that the new agency be located in their states.

These campaigns have focused on two goals: persuading legislators to pass legislation funding ARPA-H and requiring that it be headquartered outside the Washington area, and providing administrators with their region’s qualifications as a home present.

HHS officials have yet to say where ARPA-H will be located. And they warned there won’t be a sprawling campus like the National Institutes of Health — a 300-acre research facility employing 18,000 people in Bethesda, Maryland.

The biomedical research agency mimics similar programs in the Departments of Defense and Energy that empower program managers to fund risky and innovative projects to develop products or advance science — rather than the NIH model of awarding incremental grants, which is associated with more stringent supervision. DARPA is headquartered in Arlington, Virginia, while ARPA-E is headquartered in Washington adjacent to the Department of Energy’s main offices.

Groups vying to become the agency’s home say they expect HHS to open a formal selection process, though agency officials have yet to outline one. Lawmakers could seek to require HHS to do so as part of future appropriations, the groups say.

Any such legislation would likely need to be part of a large package attached to a year-end government spending bill, said congressional aides familiar with the discussion, speaking on condition of anonymity. That bill would also likely include ARPA-H funding for fiscal 2023, they said. The Biden administration has requested as much as $6.5 billion to get the agency fully operational, but Congress has so far committed only $1 billion to do so.

The idea has bipartisan support from Sens. Patty Murray (D-Wash.) and Roy Blunt (R-Mo.), the Democratic and Republican heads of the Senate Appropriations Committee, which oversees nearly all federal health spending.

The level of federal investment has attracted a number of cities, businesses and universities. Some lawmakers, notably Senator Richard Burr (RN.C.), want new funding or approvals for ARPA-H to come with the condition that the new research group be far from the NIH Maryland campus.

Boston-area universities, pharmaceutical companies and their trade groups formed the Coalition for Health Advances and Research in Massachusetts (CHARM) this year to bring ARPA-H to the state.

The group organized state legislatures and contacted the Biden administration to commend the state, noting the presence of prestigious universities and life science companies. Having the research agency’s program managers in the state would mean becoming a hub for groups applying to them for funding.

“If it’s not going to be in Washington, DC, then there’s no better place than here,” said Steve Walsh, president and chief executive officer of the Massachusetts Hospital & Health Association, part of CHARM.

The group paid $20,000 to hire Ann Jablon, former Rep. Richard Neal’s (D-Mass.) chief of staff, and Robert Diamond, a White House aide under President Barack Obama, to lobby for them this year. Some of that lobbying supported the Senate’s ARPA-H approval, which included wording requiring the agency to be located outside of the nation’s capital area, Walsh said.

influence of the legislature

A Texas coalition paid $30,000 each in the past two quarters to hire former Rep. Lamar Smith (R-Texas) to lobby on their behalf to bring ARPA-H to Texas, lobbying disclosures show.

The group’s leaders see the selection as a sign that the state is on par with major life sciences centers like Massachusetts or California, further enhancing the esteem in which cancer research and treatment centers like MD Anderson are held.

“The real benefit for Texas would be to shine a light on the great assets that we have here,” said Wayne Roberts, chief executive officer of the Cancer Prevention and Research Institute of Texas, a publicly funded cancer research initiative. “ARPA-H could be President Biden’s hallmark, and he will want it in a place where it can be successful. We know it would be well served in Texas.”

Atrium Health, formerly known as Carolinas HealthCare System, a hospital system operating in the Carolinas, Georgia and Alabama, also listed ARPA-H in its lobbying records. The company spent a total of more than $450,000 lobbying on a range of issues in the first half of the year.

Cornell University and Boston University both listed ARPA-H in their lobbying disclosures that year, which together listed nearly $500,000 to influence Congress that year.

ARPA-H newly sworn director Renee Wegrzyn, in consultation with HHS Secretary Xavier Becerra, will decide where the new agency will be based, said Amy Reiter, an ARPA-H spokeswoman.

Reiter noted that the agency’s physical footprint will be “inherently small” as program managers will travel regularly and receive ideas from across the country.

“Regardless of ARPA-H’s physical location, the agency’s mission is to find and fund the most promising ideas through fair and open competition to help develop impactful solutions,” she said. “These ideas are expected to come from across the country and in some cases from abroad.”

To contact the reporter on this story: Alex Ruf in Washington [email protected]

US and EU regulatory proposals for AI under the magnifying glass