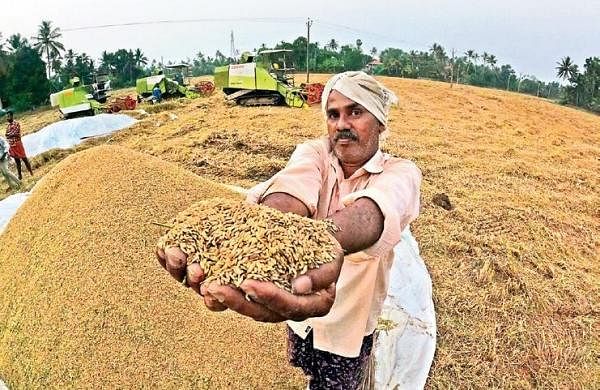 KUTTANAD: Rotting rice field, growing debt and official apathy. It was sheer desperation that drove Sebastian to make a self-immolation offer in front of the Kallara Krishi Bhavan in Kottayam on February 25th. Fortunately, timely intervention by some local residents saved the farmer’s life. In the past 10 days, two farmers in Upper Kuttanad have attempted suicide, citing the mill owners’ alleged deliberate delay in obtaining their rice field and the Civil Supplies Corporation’s apathy for their plight.

However, the government has yet to intervene. According to the farmers, about two lakh tons of rice have been lying in the open fields of the Upper Kuttanad, Vechoor, Makopara, Kallara and Neendoor areas for more than a month. Civil Supplies Corporation hired Reismuller to source the rice on condition that they supply 68 percent rice to the company. But the farmers accuse the mill owners of deliberately delaying procurement in order to negotiate and lower prices.

Thomas, a farmer from Neendoor Makkethara, said the mill owners are demanding a huge waste discount of 10 to 20 percent. “As the acidity of the soil in the Upper Kuttanad region is high, the yield is low. So they try to exploit us. About 13,500 quintals of rice have been lying in the Makkethara Kunnathukandam fields for more than 15 days.

What should we do, ”said an aggrieved Thomas who was the second farmer in the last 10 days to attempt suicide in the Upper Kuttanad region. He tried to set himself on fire on March 1st but was rescued by other farmers. Sebastian, who is also the convener of the Mundar Paddy Grower’s Forum, said he took the extreme step because his family was struggling with rising debts. “I took out a bank loan of Rs 3 lakh to cover farming costs.

Although this is a six-month interest-free loan, the bank will charge 15 percent interest if we do not close it within the agreed period. The rice field was harvested on January 31st and a summer rain could have ruined the yield, ”he said, adding that mill owners and agents were deliberately delaying procurement to frustrate farmers.

“You know we will try desperately to sell the yield”

“They know we will try desperately to sell the proceeds as it can rain at any time. They are asking for a 16 percent waste discount, which is unbearable. Last July I suffered a great loss because the rains destroyed the first crop, ”he said. said Sajeev Rajappan of Chengalam.

“Since we use machines for harvesting, there is little waste. We gave them a 2.5 percent discount last year. We also had to cover other expenses like labor and harvest costs, ”Sajeev said. The rice was harvested on February 6th and the agents arrived on March 4th for procurement. Babu Simon of Neendoor Kaipuzhakara Rice Fields said he suffered a huge loss last year because the mill owners refused to raise his yield because they questioned the high waste fee. “We asked the paddy procurement and agriculture officers to take steps to obtain early procurement. But nobody reacted positively, ”he said.

Meanwhile, the Office of the Minister of Civil Services announced that the mill owners were not interested in sourcing rice from Upper Kuttanad because the yield was low and the waste was high. “You have asked for government compensation. After we spoke to them, they promised to start the procurement process immediately, ”said one official.