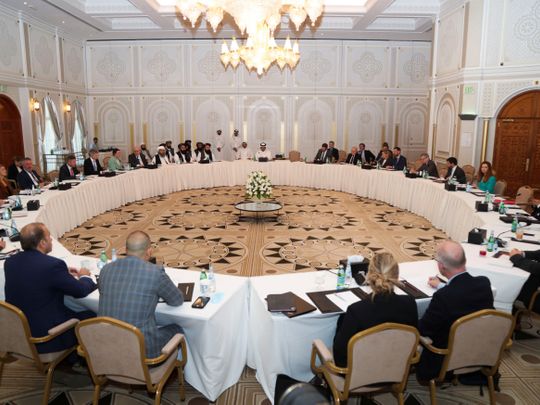 Doha: The Taliban held their first personal talks with a joint US-EU delegation in Qatar on Tuesday when Brussels pledged one billion euros (1.2 billion US dollars) in aid to Afghanistan.

The Taliban are demanding recognition and help to avoid a humanitarian catastrophe after they came back to power in August after the withdrawal of US troops after 20 years of war.

UN chief Antonio Guterres previously called on the world to donate to drought-stricken and impoverished Afghanistan in order to avert economic collapse, but also criticized the Taliban’s â€œbrokenâ€ promises to Afghan women and girls.

The President of the European Commission, Ursula von der Leyen, announced the EU aid package at a virtual G20 summit in Italy on Tuesday, which is intended to “prevent a major humanitarian and socio-economic collapse”.

She stressed that the money was “direct support” for Afghans and would be channeled to international organizations that work on the ground, not to the Taliban’s transitional government, which was not recognized by Brussels.

“We have made clear our conditions for any cooperation with the Afghan authorities, including respect for human rights,” she said.

â€œSo far the reports speak for themselves. But the Afghan people should not pay the price for the Taliban’s actions. “

Help is urgently needed by the Taliban as Afghanistan’s economy is in dire straits and most aid stops even as winter approaches, food prices rise and unemployment rises.

EU countries are suspicious of an increase in Afghan asylum seekers trying to enter the bloc, as was the case when Syrians fleeing the war in 2015.

The face-to-face talks in Doha on Tuesday were made possible by Qatar, which has long been home to a Taliban political office.

â€œI think to deal with them [the Taliban] is now the most important thing, â€said Mutlaq Al Qahtani, a special envoy for the Qatari foreign minister, who brushed aside the question of recognition of a Taliban government.

“A priority as we speak is humanitarian” [situation]”is education, is free passage” of people who want to leave the country, he said at the conference of the Global Security Forum in Doha.

EU spokeswoman Nabila Massrali said the meeting with the Taliban would â€œallow the US and European sides to address issuesâ€ including respecting women’s rights and preventing Afghanistan from becoming a haven for â€œterroristâ€ groups.

â€œThis is an informal exchange on a technical level. It is not a recognition of the ‘interim government’, â€she said.

The Taliban regime, not yet recognized as a legitimate government by any other country, also faces a security threat from the Islamic State-Khorasan (IS-K) group, which has launched a series of deadly attacks.

“We want positive relationships with the whole world,” the Taliban’s incumbent foreign minister, Amir Khan Muttaqi, said at an earlier event in Qatar.

â€œWe believe in balanced international relationships. We believe that such a balance can save Afghanistan from instability, â€said Muttaqi, who on Saturday led the Taliban delegation for the first personal talks with US officials since the US withdrew.

Guterres had previously underscored his dissatisfaction with the Taliban over their treatment of women, despite vowing not to repeat their previous tough line.

“I am particularly concerned that promises made by the Taliban to Afghan women and girls are being broken,” he told reporters on Monday.

Afghan boys were allowed to go back to secondary schools three weeks ago, but in large parts of the country girls are said to be staying at home with teachers even though they can attend primary school.

When asked about girls ‘exclusion, Muttaqi claimed their schools had closed because of Covid-19 – a public health threat that he believed had waned – but failed to explain why boys’ schools had opened.

Muttaqi also insisted that there was no discrimination against the Shiite community, claiming that IS-K was being tamed.

“All the preparations they made were 98 percent neutralized,” he said, without giving any details.

IS-K alleged a bomb attack on a Shiite mosque that killed more than 60 people on Friday, the deadliest attack since the US withdrew.

To underline the uncertain security situation, the US and UK warned their citizens on Monday not to avoid certain hotels in Kabul.